Raising a Future King the Montessori Way: All About Prince George’s Preschool 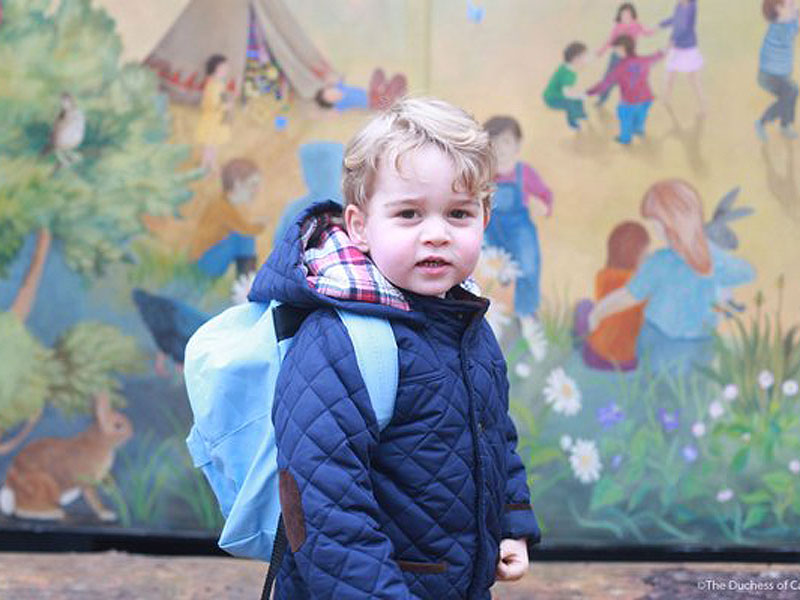 Sharpen your pencils – Prince George is off to school! Today, the 2-year-old – sporting a baby blue backpack – had his first day at Westacre Montessori School, near his family’s home, Amner Hall, in Norfolk, England. And luckily for the rest of us, the whole thing was captured adorably by his mom, Princess Kate. Prince William and Kate chose to enroll their son in a school that practices the famous Montessori method. Founded by Italian physician and teacher Maria Montessori, the distinctive educational approach is known for encouraging creative thinking, personalized learning and embracing individuality.Below, just a few of the key advantages the future king stands to gain from his Montessori education.

1. He’ll be ready to mingle with all sorts of people.
As a monarch-in-the-making, Prince George will be rubbing elbows with people from every walk of life. Montessori classrooms include kids of all ages, from toddlers just like George to those entering elementary school. This mix, the American Montessori Society says, is perfect preparation for fostering a spirit of inclusiveness with others later in life. “Younger children learn from older children; older children reinforce their learning by teaching concepts they have already mastered,” their website explains. “This arrangement also mirrors the real world, where individuals work and socialize with people of all ages and dispositions.”

2. He’ll be a deep thinker.
He may just be talking dinosaurs now, but George’s future will require conversing with heads of state as well as working with charities and the armed forces. The Montessori Method states that during the first six years of a child’s life, he or she has an “absorbent mind,” meaning that “the young child seems to just soak up everything in his environment without even thinking about it,” the Montessori Society AMI UK says. At his own pace, George will develop skills – and a big imagination – that will be crucial in the years to come.

3. He’ll have the freedom to be himself.
For a boy who can’t help whizzing around a coffee shop, we can imagine sitting still for extended periods of time may be a challenge. Luckily for George, the Montessori method believes in letting children “navigate their own paths.” As the American Montessori Society says, “Montessorians understand that internal satisfaction drives the child’s curiosity and interest and results in joyous learning that is sustainable over a lifetime.”

4. He’ll learn to admit when he’s made mistakes.
No one’s perfect – not even a prince! And thanks to his Montessori education, George will get a dose of humility, along with the confidence to overcome any obstacles. “Self-correction and self-assessment are an integral part of the Montessori classroom approach,” the American Montessori Society says. “As they mature, students learn to look critically at their work, and become adept at recognizing, correcting, and learning from their errors.”

5. He’ll learn the importance of community.
One day, Prince George will be a symbol to unite an entire country – so he’ll need to understand what brings people together in the first place. And while he is on his way to understanding loving relationships thanks to his parents, grandparents, and little sister, a Montessori education, which focuses on creating a community in the classroom, will only cultivate that understanding. Montessori’s policy of helping children learn how to productively resolve conflicts on their own will surely be helpful with any family spats – or global crises!

Sorry, the comment form is closed at this time.

Any cookies that may not be particularly necessary for the website to function and is used specifically to collect user personal data via analytics, ads, other embedded contents are termed as non-necessary cookies. It is mandatory to procure user consent prior to running these cookies on your website.

ENROLL NOW! Click here to learn more about the steps we are taking to maintain a Healthy & Safe Learning Environment